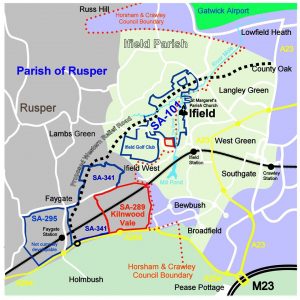 “Mr Speaker, I’m very pleased to see the Environmental Bill coming before us again next week, but at the same time Homes England are proposing 13,000 homes to be built just outside of my constituency – on greenfield sites to the west of Ifield – where my constituents, through their local authority, won’t get a say in the planning process.

“Can we have a Statement from the Communities Secretary as to how my constituents in Crawley can have a say over the impacts of 13,000 housing units, the loss of green space, and the pressure on infrastructure that that would represent. Thank you”.

“Mr Speaker, my honourable friend lives in such a beautiful part of the country that many more people want to live there, and that is the difficulty many people with attractive constituencies find, and it is a natural desire of people to live in the most outstanding areas of our countryside.

“There is inevitably attention that the government has a mission to build more houses, high quality well-designed and affordable houses, and there is a balance to be struck between building them and protecting greenfield areas.

“However, I do understand the issue he raises , that people in a nearby area – but not the same administrative area – I can feel that they are not sufficiently represented. So, I will pass his request on to my right honourable friend the Housing and Communities Secretary”. 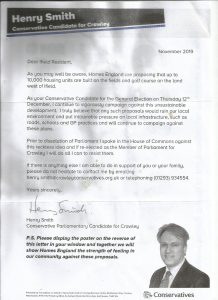 As your Conservative Candidate for the General Election on Thursday 12th December, I truly believe that any such proposals would ruin our local environment and put intolerable pressure on local infrastructure such as roads, schools and GP practices, and will continue to campaign against these plans.

Prior to dissolution of Parliament, I spoke in the House of Commons against this reckless idea, and if re-elected as the Member of Parliament for Crawley I will do all I can to resist them.

If there is anything else I am able to do in support of you or your family, please do not hesitate to contact me by emailing henry.smith@crawleyconservatives.org.uk or telephoning (01293) 934554.

PS Please display the poster on the reverse of this letter in your window, and together we will show Homes England the strength of feeling in our community against these proposals. 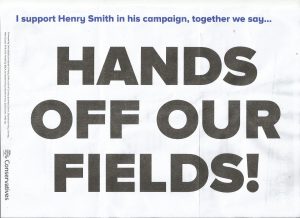 I was pleased the Crawley MP Henry Smith came to our Ifield Golf Club AGM last night [Nov 8]. He stayed about half-an-hour and has vowed to fight against the development. I didn’t learn anything new, but he showed his concern about the impact on our roads, services etc.  Also, will Homes England keep to their promise for a new road?

He said we must all contact Horsham District Council with our objections, as they make the decision…

Unfortunately, Horsham District Council have turned down the Golf Club’s application to be an ‘Asset of Community Value’ and the Golf Club Chairman Richard Cowlarde is investigating if we can appeal.

Crawley MP Henry Smith stated [at the Ifield Golf Club AGM] he was against the 10,000 homes for the reasons we all know.

He thinks it can be stopped if enough people object. He asked everyone to write individually.

The Golf club will let us know who to write too.

If the Homes England plan is rejected, he does not think it will be overruled

He does not know what Crawley Borough Council thinks.

Here are some notes I took of the comments made by Henry Smith MP at the AGM:-

Henry Smith thought the project was a big threat to our quality of life and it was up to the Commission to look after the building of new towns. He said the end project of the new town would be a quarter of the size of Crawley again.  Schools, highways etc would be needed, making the area intolerable.

He said that as many as possible should attend the advertised meetings and express their feelings. Homes England must be shown the feelings of the people involved; singular group protest would not carry any weight, individual protest is far more effective. He also said we should make our thoughts known to Horsham District Council and let them know just how we feel. He said the Homes England is a threat and must be expressed to Horsham District Council, and there should be a consultation which must be supported and reported to the government.

A question was asked if there was any chance of Crawley Borough Council getting the project repelled? Henry said that before anything like that could take place, a project of this scale – showing road and relief roads – must be looked at in full. He said he did not know yet how CBC felt about it, and thought perhaps they were keeping their powder dry for the moment.

LETTER TO JEREMY QUINN MP FOR HORSHAM – FROM BOB COOPER

I  recently attended the Annual General Meeting at the Ifield Golf Club and heard what Henry Smith MP had to say about the Homes England plan to build 10000 houses within the ancient parish of Ifield, which includes the Golf course.

I would like to know what your opinion is regarding this plan as you are my local MP for Copthorne/Mid Sussex.

My father was a member of Ifield Golf Club since 1936 until he passed away in January 1999. His ashes are scattered on the golf course together with his wife’s (my Mother) as they requested. The last time I contacted you was in connection with the building of a new hospital at Pease Pottage, Crawley. If I recall correctly you asked me to contact Henry Smith as he was “championing” the cause. Well he didn’t and now as we know even more houses are being built there instead.

Personally my objections to the Homes England plan are:

1.    There are already enough houses/apartments etc currently under construction in the Crawley/Horsham area, surely the quota must have been met  by now?

2.    The transport infrastructure is already under enormous pressure, rush hour traffic is usually at a standstill now!

3.    There are not enough school places now let alone with at least a further 20,000+ needed in the future.

4.    There are not enough GP practices now with several having already closed their intake of new patients.

5.    One Hospital (East Surrey) will NEVER cope with all those possible extra patients in the future. The Crawley area should have had a new hospital built several years ago. For years now the waiting list for treatment has been long, this will only get worse with more houses being built. We will all end up waiting longer to see the GP or receive hospital treatment.

One has to ask why do we need all those extra homes in the south east? Where are all the people coming from? The UK is full up and personally I welcome your parties plan to introduce a point style system based purely on qualifications for immigration, then perhaps not so many new homes will required.

I look forward to your reply