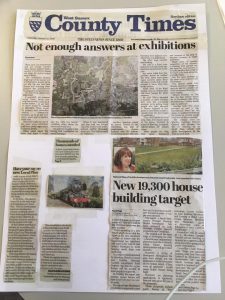 There were a lot of questions and not enough answers when Homes England held a number of exhibitions laying out plans for 10,000 homes west of Ifield.

The exhibitions boasted huge maps of the area as well as information boards laying out why the site had been chosen and outlining other projects the government’s housing agency had overseen.

If approved, the scheme would bring three new neighbourhoods, made up of 10,000 homes – 35 per cent of which would be classed as affordable. There would be primary and secondary schools, community facilities, up to 50 per cent green space and a western relief road.

The relief roads was one of the areas where exhibition staff were rather vague when it came to details.

When asked about the route, they knew it would join the A264 but weren’t confident about where the other end would lead.

One pointed roughly at the County Oak roundabout on one of the maps.

When it was mentioned that that road was already regularly choked with traffic, without adding thousands more cars, they said it would be ‘worked on’.

Another question raised by several visitors to the exhibitions was that of employment. Homes England said the scheme would bring 10,000 new jobs but many were dubious as to where they would be found.

The other huge concern was flooding.

The area is a flood zone and plans to build on the site have been turned down in the past.

But, when asked how that problem would be tackled this time, there were more vague answers about flood alleviation works, but nobody seemed to know what they would involve.

Aidan Zeall, of the Ifield Society, was one of those who had been hoping for more answers.

He said: “We’ve attended a number of these sessions now and the consistent message we’re getting from people who have attended is Homes England at this point in time seem unable to answer even the most basic of questions.

“They don’t know the local area, they don’t know some of the issues involved in terms of flooding, transport, infrastructure, GP surgery issues.

“Most people are very, very upset, displeased and annoyed at the lack of concrete answers to their questions.”

There were, of course, supporters of the scheme. A number have pointed out the need for more homes in Crawley and Horsham, calling for them to be both attractive and affordable.

But the main feelings so far seem to be concern and frustration.

One person asked how already stretched emergency services and GPs would cope with the demand from 10,000 more homes.

Others focused on the fact the new homes would be on Horsham’s side of the boundary but Crawley would take the pressure.

Another said: “The plans provided as part of this consultation were far too vague, to enable members of the public to provide useful comment on the proposals.”

The scheme rests on whether Horsham District Council will allocate the site for housing in its Local Plan, which will guide development in the area up until 2036.

The council’s cabinet will be asked to approve a draft plan later this month.

Ifield residents have been invited to a Talk Ifield meeting about the Ifield West proposals. It will be held on Wednesday January 22 from 7-8.30pm at Elim Church, in The Mardens.

At least 19,300 homes must be built in Horsham over the next 20 years – according to the Government

A total of at least 19,300 new homes will have to be built in the Horsham area over the next 20 years.

By Sarah Page
Wednesday, 22nd January 2020, 10:59 am
That’s according to a new report which shows that the figure is the new minimum number of homes that the Government has calculated will need to be built in and around Horsham to meet housing needs from now until 2039.

In a report commissioned by Horsham District Council and Crawley Borough Council, consultants Iceni Projects say that the 19,300 homes will be needed to meet population growth.

In Crawley, the report says another 15,040 homes will have to be built there over the next 20 years.

The council is in the early stage of developing the plan – a Government requirement placed on councils to identify where future housing developments will go in their districts.

However, a string of developers throughout the area have already put out proposals to build thousands of new homes which – if they were all approved – would mean 27,900 homes being built.

However, no planning applications, or approvals, have yet been given for any of the proposals.

Councillors will be asked at a Horsham District Council cabinet meeting on January 30 to agree to a draft of the Local Plan going out for public consultation.

Councillor Claire Vickers said: “Some 500 potential housing sites have been put forward by developers and landowners for possible future housing and the council is required to look at each one.”

She said possible development sites would be listed but that none would be selected or removed until a later date after the council had heard the public’s views on them.

I refer to your article WSCT 16 January ‘Initial decisions soon on plans for 27,000 homes’ which I believe is a misinterpretation of the true picture since no decisions on possible  housing sites  are being  made by the Council at this stage.

The District Council is in the early stage of developing a new Local Plan.  This is a Government requirement placed on councils to identify where future housing developments will go in their districts. In Horsham District’s case this is for the period until 2036.

At the Cabinet meeting on 30 January, councillors will be asked to agree that this draft of the Local Plan should go out for consultation. Some 500 potential housing sites have been put forward by developers and landowners for possible future housing and the Council is required to look at each one.

This consultation document lists possible sites and in particular shows an analysis of the major (1000 homes+) ones and seeks public comment on them. It does not select or remove any of those sites – that will happen at a later stage of the Local Plan process after we have heard people’s views on them.

The consultation also looks at the potential house-build numbers the District may be required to take as part of this process.

We want to hear people’s views on the draft Plan. I encourage as many of you as possible to give your feedback during the consultation period, which will run between 17 February and 30 March.

Please do register at www.horsham.gov.uk/localplan to have your say and receive regular updates on the progress with the Plan.