A review of Horsham District Council’s local plan will give residents a chance to have a say on potential new development sites and housing numbers. 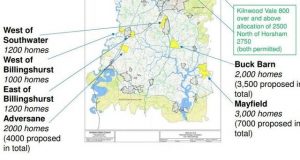 Horsham local plan possible strategic sites. Rookwood Golf Course in Horsham is also being considered (N.B. Mayfield is the name of the promoters not the place name)

The current planning framework agreed back in 2015 set a housing target of 800 homes a year, but this requirement is set to be increased significantly as the Government looks to boost housebuilding nationwide.

The district must allow for 965 homes to be built every year between now and 2036 as well as taking on hundreds that neighbouring authorities do not have the space to build.

The council has raised concerns with the Government about the ‘huge and unprecedented’ housing demand it has been told to meet.

This means that HDC will have to allocate new sites both large and small to accommodate extra housing, but no decisions on any allocations have been taken at this stage.

A draft local plan will be put out for public consultation from Monday (February 17) to March 30.

A number of potential housing sites are included in the draft plan which the public will have a chance to have a say on.

List of smaller sites (figures listed are smaller scale housing requirements for settlements in addition to any made neighbourhood plan while the council says ‘it is not expected that it will be necessary or even possible to allocate all of these sites):

Land at Slaughterford Farm has been identified by Itchingfield Parish Council, with views on additional shortlisted sites sought for land south of Smugglers Lane, south of Muntham Drive and land to the rear of Two Mile Ash Drive.

Billingshurst – to be determined

Land at The Warren

Land at Cowfold Glebe, Brook Hill and land south of the A272 have been put identified by the parish council. The two other sites are land north of the A272 and land east of the recreation ground.

Parsonage Farm, land west of Backsettown Farm, land east of Wantley Hill and south of the bowls club have been identified in the neighbourhood plan, with the other sites land north of Furners Lane and Sandgate Nursery.

Sandygate Lane, south of Church Farm House and Glayde Farm all identified by the parish council.

Land west of Church Road, land north of The Rise, Dunstans Farm and land at Dunstans.

West of Church Street and land north of Guildford Road.

Rusper – to be determined

Southwater – to be determined

Little Paddocks in Pound Lane, land east of Pound Lane and land at Smugglers Lane all identified in the neighbourhood plan.

Land west of Smock Alley and land at Hatches Estate.

Both Mannings Heath and Slinfold were looked at but no sites, other than those already identified in the neighbourhood plans, were seen as suitable for development.