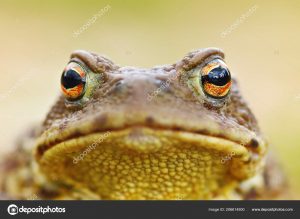 “SOME THOUGHTS ON THE COMMON TOAD” [AND SPRING] BY GEORGE ORWELL

Before the swallow, before the daffodil, and not much later than the snowdrop, the common toad salutes the coming of spring after his own fashion, which is to emerge from a hole in the ground, where he has lain buried since the previous autumn, and crawl as rapidly as possible towards the nearest suitable patch of water. Something – some kind of shudder in the earth, or perhaps merely a rise of a few degrees in the temperature – has told him that it is time to wake up: though a few toads appear to sleep the clock round and miss out a year from time to time – at any rate, I have more than once dug them up, alive and apparently well, in the middle of the summer.[1]

At this period, after his long fast, the toad has a very spiritual look, like a strict Anglo-Catholic towards the end of Lent. His movements are languid but purposeful, his body is shrunken, and by contrast his eyes look abnormally large. This allows one to notice, what one might not at another time, that a toad has about the most beautiful eye of any living creature. It is like gold, or more exactly it is like the golden-coloured semi-precious stone which one sometimes sees in signet rings, and which I think is called a chrysoberyl.

For a few days after getting into the water the toad concentrates on building up his strength by eating small insects. Presently he has swollen to his normal size again, and then he goes through a phase of intense sexiness. All he knows, at least if he is a male toad, is that he wants to get his arms round something, and if you offer him a stick, or even your finger, he will cling to it with surprising strength and take a long time to discover that it is not a female toad. Frequently one comes upon shapeless masses of ten or twenty toads rolling over and over in the water, one clinging to another without distinction of sex. By degrees, however, they sort themselves out into couples, with the male duly sitting on the female’s back. You can now distinguish males from females, because the male is smaller, darker and sits on top, with his arms tightly clasped round the female’s neck. After a day or two the spawn is laid in long strings which wind themselves in and out of the reeds and soon become invisible. A few more weeks, and the water is alive with masses of tiny tadpoles which rapidly grow larger, sprout hind-legs, then forelegs, then shed their tails: and finally, about the middle of the summer, the new generation of toads, smaller than one’s thumb-nail but perfect in every particular, crawl out of the water to begin the game anew.

I mention the spawning of the toads because it is one of the phenomena of Spring which most deeply appeal to me, and because the toad, unlike the skylark and the primrose, has never had much of a boost from poets. But I am aware that many people do not like reptiles or amphibians, and I am not suggesting that in order to enjoy the spring you have to take an interest in toads. There are also the crocus, the missel thrush, the cuckoo, the blackthorn, etc. The point is that the pleasures of spring are available to everybody, and cost nothing. Even in the most sordid street the coming of spring will register itself by some sign or other, if it is only a brighter blue between the chimney pots or the vivid green of an elder sprouting on a blitzed site. Indeed it is remarkable how Nature goes on existing unofficially, as it were, in the very heart of London. I have seen a kestrel flying over the Deptford gasworks, and I have heard a first-rate performance by a blackbird in the Euston Road. There must be some hundreds of thousands, if not millions, of birds living inside the four-mile radius, and it is rather a pleasing thought that none of them pays a halfpenny of rent.

As for Spring, not even the narrow and gloomy streets round the Bank of England are quite able to exclude it. It comes seeping in everywhere, like one of those new poison gases which pass through all filters. The spring is commonly referred to as “a miracle,” and during the past five or six years this worn-out figure of speech has taken on a new lease of life. After the sort of winters we have had to endure recently, the spring does seem miraculous, because it has become gradually harder and harder to believe that it is actually going to happen. Every February since 1940 I have found myself thinking that this time Winter is going to be permanent. But Persephone, like the toads, always rises from the dead at about the same moment. Suddenly, towards the end of March, the miracle happens and the decaying slum in which I live is transfigured. Down in the square the sooty privets have turned bright green, the leaves are thickening on the chestnut trees, the daffodils are out, the wallflowers are budding, the policeman’s tunic looks positively a pleasant shade of blue, the fishmonger greets his customers with a smile, and even the sparrows are quite a different colour, having felt the balminess of the air and nerved themselves to take a bath, their first since last September.

Is it wicked to take a pleasure in Spring and other seasonal changes? To put it more precisely, is it politically reprehensible, while we are all groaning, or at any rate ought to be groaning, under the shackles of the capitalist system, to point out that life is frequently more worth living because of a blackbird’s song, a yellow elm tree in October, or some other natural phenomenon which does not cost money and does not have what the editors of left-wing newspapers call a class angle? There is no doubt that many people think so. I know by experience that a favourable reference to “Nature” in one of my articles is liable to bring me abusive letters, and though the key-word in these letters is usually “sentimental”, two ideas seem to be mixed up in them. One is that any pleasure in the actual process of life encourages a sort of political quietism. People, so the thought runs, ought to be discontented, and it is our job to multiply our wants and not simply to increase our enjoyment of the things we have already. The other idea is that this is the age of machines and that to dislike the machine, or even to want to limit its domination, is backward-looking, reactionary and slightly ridiculous. This is often backed up by the statement that a love of Nature is a foible of urbanised people who have no notion what Nature is really like. Those who really have to deal with the soil, so it is argued, do not love the soil, and do not take the faintest interest in birds or flowers, except from a strictly utilitarian point of view. To love the country one must live in the town, merely taking an occasional week-end ramble at the warmer times of year.

This last idea is demonstrably false. Medieval literature, for instance, including the popular ballads, is full of an almost Georgian enthusiasm for Nature, and the art of agricultural peoples such as the Chinese and Japanese centre always round trees, birds, flowers, rivers, mountains. The other idea seems to me to be wrong in a subtler way. Certainly we ought to be discontented, we ought not simply to find out ways of making the best of a bad job, and yet if we kill all pleasure in the actual process of life, what sort of future are we preparing for ourselves? If a man cannot enjoy the return of Spring, why should he be happy in a labour-saving Utopia? What will he do with the leisure that the machine will give him? I have always suspected that if our economic and political problems are ever really solved, life will become simpler instead of more complex, and that the sort of pleasure one gets from finding the first primrose will loom larger than the sort of pleasure one gets from eating an ice to the tune of a Wurlitzer. I think that by retaining one’s childhood love of such things as trees, fishes, butterflies and – to return to my first instance – toads, one makes a peaceful and decent future a little more probable, and that by preaching the doctrine that nothing is to be admired except steel and concrete, one merely makes it a little surer that human beings will have no outlet for their surplus energy except in hatred and leader worship.

At any rate, spring is here, even in London N.1, and they can’t stop you enjoying it. This is a satisfying reflection. How many a time have I stood watching the toads mating, or a pair of hares having a boxing match in the young corn, and thought of all the important persons who would stop me enjoying this if they could. But luckily they can’t. So long as you are not actually ill, hungry, frightened or immured in a prison or a holiday camp, Spring is still Spring. The atom bombs are piling up in the factories, the police are prowling through the cities, the lies are streaming from the loudspeakers, but the earth is still going round the sun, and neither the dictators nor the bureaucrats, deeply as they disapprove of the process, are able to prevent it.