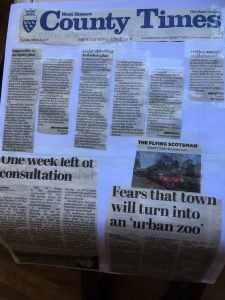 After it was announced yesterday [March 25 2020] that Parliament would shut down a week early “to prevent any further spreading of the virus”, a deeply-concerned Sussex MP said today:
“It’s fine for builders to keep calm and carry on, but not Parliament – it just feels wrong to me”
It feels wrong because it is wrong – just as it is wrong for Horsham District Council not to extend this Monday’s deadline for comments to their Local Plan [‘Impossible to navigate plan’, West Sussex County Times, March 26].
If national and local government have the power to shut down schools and cancel examinations, they have the power to shut down construction sites and extend local plans.
Richard W. Symonds
The Ifield Society