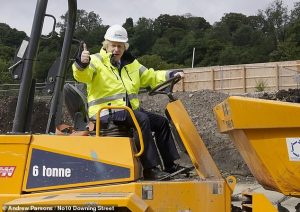 A comment on UK Government plans to “build, build, build” and why we must grow back better

On Tuesday, 10,000 people will take part in a virtual mass lobby of MPs to urge them to put people, nature and climate at the heart of plans to rebuild our economy.

This is expected to coincide with a speech by the Prime Minister outlining his plan “to build UK back to health”.

As widely reported in the media over the past few days (see for example here, here and here), the UK Government is developing plans to “build, build, build” through a programme dubbed “Project Speed” and there is even talk of relaxing environmental protections to get the economy moving again.

This would be a fundamental mistake.

The UK Government has repeatedly pledged to maintain high environmental standards and to have the most ambitious environmental programme of any country on earth.

Clearly the Covid-19 crisis has put huge strains on our country and economy, and it is right that the UK Government supports businesses to get back on their feet.  But as we recover from this pandemic, our environmental protections should not be on the negotiating table.

A thriving natural environment is essential for our physical and mental health and, as I have written over the past few weeks, there is an opportunity to invest in nature to support the economy and tackle the climate and ecological emergency together.

I reported last week that, with others, we have outlined plans for 330 shovel-ready projects which would provide 5,000 jobs in the environment sector and 5,000 jobs in delivery and wider supply chains.  In the medium term if the UK Government delivers its ambition in the 25-year plan for the environment of half a million hectares of restored habitat, this could mean a further 15,000 jobs in other similar projects.

Temptation to weaken environmental regulations in order to speed up the economy must be resisted.

It is wise to be cautious as we have been here before.  During the previous recession, pressure was repeatedly put on our nature conservation laws and our planning system to relieve perceived constraints on development.  Yet, countless reviews have shown that implemented well these laws and the planning system can guide good development.

For example, the outcome of the 2012 review of EU Nature Directives showed that far from being the barrier to economic recovery that some framed them as, the report clearly showed the economic value of the sites and species they protect.  It became clear that many of the problems arose due to lack of implementation rather than over-implementation.  At that time, Defra rightly concluded “The Government strongly supports the aims of the Habitats and Wild Birds Directives to protect our rarest and most threatened habitats and species, which contribute to the economic value of our natural environment”.

A similar conclusion was drawn in other reviews include through a more widespread and cross-party report of “Red Tape” led by Sir Oliver Letwin (see here).

My colleague Kate Jennings has been tracking these reviews over the past decade and, with Wildlife and Countryside Link Director Richard Benwell, wrote this excellent blog exposing the simplistic and flawed logic of those who see stripping away red tape as the answer to freeing up the economy.  They wrote ,

“Red tape challenges are intended to cut costs, stripping back burdens on business. Yet reducing costs is exactly the reason that regulations are introduced in the first place: to avoid social, environmental or wider economic costs.  With a single-minded approach to cutting regulation, governments run the risk of transferring and multiplying costs from businesses to society at large. Think of the cost to communities downstream if landowners disregard flood risk reduction rules, or the cost to public health and future generations if car companies flout emissions limits. Think of Grenfell.  A small saving for business can become a big cost to society.

So, the real challenge is to identify costs that are truly unnecessary, or costs that have fallen on the wrong party. Through this lens we see that efficiencies can sometimes be found, but overall, the green tape of our environmental laws is a valuable safety belt that protects us from danger or guides us toward a greener future.”

The stakes are high.  Please do take part in the virtual mass lobby on Tuesday and urge your MP to use their political voice for nature so we can grow back better.