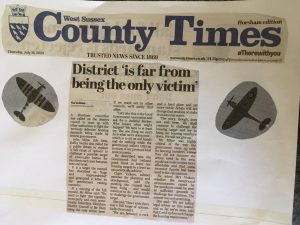 A Horsham councillor has called on the district council to team up with other authorities to fight the ‘seriously defective’ housing demands being made by central government.

John Milne (Lib Dem, Roffey North) also called for a public debate to explore ‘a full range of options’ to challenge a possible target of 1,200-1,400 homes for Horsham each year between now and 2036.

It is a target the council has described as ‘huge and unprecedented’ and prompted a letter to the government raising concerns.

At a meeting of the full council, Mr Milne said: “We need to fight this together, cross-party and even cross-county boundary. Horsham District Council is far from being the only victim here. If we reach out to other councils, we’ll surely find allies.

“Let’s take this to the Local Government Association and ask for a Judicial Review. Who knows what might happen? We have to at least try. The one thing we can’t do is what we’re doing now – which is to sit on our hands and do nothing while the government inflicts GBH on so many of our precious local environments.”

He described how the Government had ‘refused point blank to lower our housing targets to a level we can practically achieve’.

Claire Vickers, cabinet member for planning and development, told the meeting the council had been doing – and would continue to do – all it could to challenge the government target.

She said: “How I wish there was a full range of options. Sadly there aren’t.

“We are between a rock and a hard place, and yet more public debate will not change that position or make decisions any easier.

“The story, though, does not end here. We shall continue to challenge the housing target and try to bring our numbers down. We will not give up.”

Mr Milne was highly critical of the way the government came up with its housing numbers, saying they did not measure the actual need in the area, would not make houses more affordable and that some incorrect figures had been used in the calculations.

He asked Mrs Vickers whether the exceptional circumstances raised by the pandemic could be seen as sufficient grounds to challenge the numbers. The answer was not promising.

She said: “We are taking legal advice on this matter and so far we’ve been told that Covid-19 does not change the housing requirement”

Dear Editor
Cllr John Milne states (“District ‘is far from being the only victim'”, WSCT, July 16]:
“We need to fight this together, cross-party and even cross-boundary…The one thing we can’t do…is to sit on our hands and do nothing while the government inflicts GBH on so many of our precious local environments”.
One thing we can do is call upon Horsham District Council and Crawley Borough Council to create a Joint Area Action Plan [JAAP] – as they did at Kilnwood Vale.
This JAAP could not just oppose central government’s housing numbers [eg by a judicial review], but could also make happen an Ifield Park Local Nature Reserve.
This could be made to happen if there was the joint political will to make it happen.