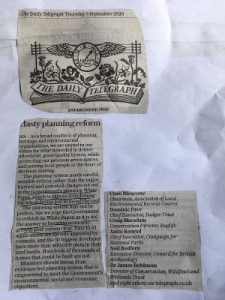 SIR – As a broad coalition of planning, heritage and environmental organisations, we are united in our vision for what is needed to deliver affordable, good-quality homes, while protecting our precious green spaces, and putting local people at the heart of decision-making.

The planning system needs careful, sensible reform rather than the major, hurried and untested changes set out in the Government’s planning White Paper, which is akin to demolishing the whole house just to mend the roof.

The planning system may not be perfect, but we urge the Government to rethink its White Paper, as it is not the answer to boosting economic growth post-coronavirus. Nine in 10 applications are already approved by councils, and the 10 biggest developers have more than 400,000 plots in their land banks. Hundreds of thousands of homes that could be built are not.

Ministers should invest in an evidence-led planning system that is empowered to meet the Government’s environmental, social and economic objectives.