Toads, spiders, daddy long legs, even mice: let them all share our homes

Species decline is being reversed in UK forests, highlands and rivers. But rewilding should start in our houses and gardens

This summer beavers have been granted “permanent right to remain” in their river home in east Devon, the first legalised reintroduction of an extinct British mammal. White storks reintroduced on the Knepp estate in West Sussex as part of another rewilding initiative have raised chicks and taken to the skies. Meanwhile, a major grant will bring European bison to woodland in Kent.

All this is exciting news for rewilding. But if we stand any chance of saving nature, maybe we also need to reverse species decline on our own doorsteps as much as we do in the countryside. Charity begins at home, they say. And perhaps rewilding does too. Ecocide isn’t just being committed in the countryside but also in our own homes, the result of our irrational hostility towards nature in domestic spaces. 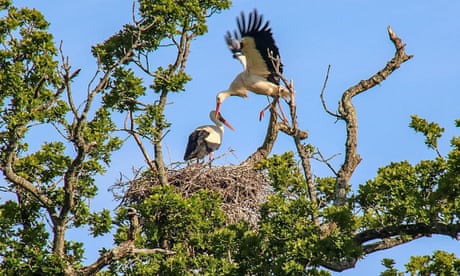 Few ideas have captured the public imagination as rewilding. But so far rewilding has been the preserve of big projects – farmland, nature reserves, and private estates. Knepp, a 3500 acre estate in Sussex, has led the way with extraordinary successes rebuilding numbers of threatened species like turtle doves, nightingales, and purple emperor butterflies . The experiment has inspired other landlords and even some Wildlife Trusts. Now instead of trying to protect what little is left after 40 years of eco-vandalism, the new emphasis is on nature restoration, restoring not only lost numbers but also lost species. As well as the bison, beavers and stork, white tailed eagles have been reintroduced on the Isle of Wight and there are hopes for lynxes in the Scottish highlands.

But it isn’t just the countryside that has been tragically depleted . Nearer home – at home in fact – we have presided over a similar ecocide. This time, it’s not the fault of rapacious farmers and developers but our own. Where once our houses and gardens provided a home to species other than ourselves, we now want to live in sterile zones. Any creature that appears indoors these days is greeted with fear, hysteria and calls for extermination. My local ‘NextDoor’ group regularly has exchanges between people panicked by the appearance of ants, spiders, moths, mice and their neighbours suggesting extreme methods of killing them. Moths should be ‘bombed’, ants poisoned and if a mouse pops in, as they often do in autumn, then it’s time to call pest controllers.

This extinction mentality extends even more damagingly to outside space. ‘Gardens’ are now treated as outside rooms and sterilised in the same way as houses, with the result that tiles, decking, and artificial grass have all but wiped out urban wildlife. The London I grew up in still had flocks of sparrows in the privet hedges, hedgehogs in back gardens, bats and moths flitting around on summer evenings and sometimes even owls calling. All this – which relied on grass, flowers, trees dropping their leaves and neglected areas – has pretty much gone from London gardens, replaced instead by lifeless outside spaces.

The names of some of our once common species indicate clearly that it was not always like this: house sparrow, house mouse, house martin, house spider, barn swallow, barn owl. These were all once common species which actually took up residence in our houses or outhouses – and what a tellingly old-fashioned concept an outhouse is. In the pre-industrial countryside, before there was glass in windows, swallows nested mainly in wide chimneys unused in summer. They also nested in bedrooms, tolerated, loved maybe, as witnesses to the dramas of life and for their sterling work in catching midges, mosquitos and flies. Along with them, there were plenty of other species which used our homes. There were house martins nesting under the eaves, sparrows and bats forming large roosts in roof spaces. Before cellars were dry lined, toads were often found there – usefully employed catching spiders, flies and ants.

There are plenty of other creatures which if spared the scorched earth policy would happily live inside – spiders, crickets, daddy long legs , ants, silver fish. Wasps and bees often form nests in lofts. Many species have close symbiotic relationships with humans. There are birds which like to nest in or near our homes like swifts which treat crevasses and cracks in the wall as holes in a hillside. In rural France a species of dormouse known as the loir de greniers (barn dormouse) is frequently found in the roof and is a protected species. Sleep in southern France is equally likely to be interrupted by geckos ( a type of lizard) partying in the roof.

I’m not suggesting we invite all creatures back into our homes. Even I draw the line at cockroaches, fleas and bluebottles which are associated with disease. But I am suggesting the extinction mentality towards creatures in or near homes is part of the wider problem which has brought our wider native wildlife to its knees. This mentality views nature as something which needs to be suppressed. Nature is messy, dirty, frightening. I was appalled recently when one neighbour posted on the neighbourhood forum about the presence of the rare stag beetle in south London. Like myself she was delighted that the area’s gardens still occasionally hosted this increasingly rare beetle. “If I saw one of these” came one reply. “I’d stamp on it.” This is the time of year when large house spiders come indoors. Inevitably, they will be greeted with hysteria and insecticide. We’ve come to see insects and other creatures especially those in or near our houses as unhygienic, revolting or terrifying instead of seeing them as part of a wider ecology.

This ecocide in homes and gardens is almost certainly counter-productive. Over-sterilisation in the house and the replacement of soil and grass with hard surfaces means children are not being exposed to the bacteria needed to develop resistance to allergens. It’s also not clear to me why artificial grass formed of potentially toxic recycled tyres is better than good old-fashioned garden dirt.

Rewilding is inspiring conservationists with its vision of restoring the lost abundance of nature. That same vision should apply to our homes and gardens , especially as , with the massive threats from development to the wider countryside, these spaces are becoming important sanctuaries. There are steps we can take to do our bit : one would be overcoming the horror of insects and helping our children to do the same. Another would be persuading councils to prioritise species protection by preventing the loss of gardens and pressurising developers to provide homes for wildlife. In particular we can all do something individually like rewilding our gardens and including swift bricks or bird and bat boxes on available walls. I might even put up a platform on my chimney in the hope that one of Knepp’s storks – birds which choose to live close to humans – might take up residence.