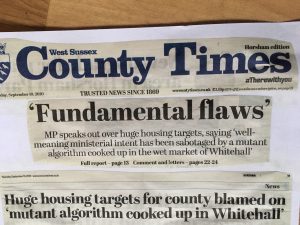 Huge housing targets for West Sussex have been blamed on a ‘mutant algorithm cooked up in the wet market of Whitehall’ by one MP.

Arundel and South Downs MP Andrew Griffith speaking in the Commons on Monday nightThe Government is currently consulting on wide-ranging planning reforms in its ‘planning for the future’ White Paper.

One of the most controversial elements is changes to the standard methodology, which would see annual housing requirements skyrocket in many parts of West Sussex.

Andrew Griffith, MP for Arundel and South Downs, secured an adjournment debate in the Commons on Monday night to discuss the issue.

He described how the planning system today is too slow, too adversarial and too expensive, but still ‘manages to create huge amounts of blight and burden on communities without delivering the volume, quality or even type of homes that we need’.

He welcomed some of parts of the White Paper, but added: “Perhaps not for the first time this summer, well-meaning ministerial intent has been sabotaged by a ‘mutant algorithm’ cooked up in the wet market of Whitehall.”

He suggested there were ‘fundamental flaws’ in the standard methodology as it was ‘entirely blind to geography’, ignoring protected areas such as AONBs and national parks and ‘must only work in dry weather’ as much of his constituency lies on floodplains.

He felt the algorithm was ‘backward looking and self-perpetuating’ as past performance is treated as entirely a predictor of future success. This would pile even more growth on the ‘overheated’ South East.

Lastly he argued the formula uses a simplistic affordability ration as a ‘false proxy for local need’.

He explained: “Trying to influence affordability through supply has been likened to a person standing on an enormous iceberg and trying to melt it by pouring kettles of hot water over their feet.”

Over the last three years Sussex has delivered 6,000 homes per year and Mr Griffith suggested that good development is organic as the ‘historical growth of our small towns and villages can be traced like rings on a tree’.

As the proposals are currently constructed he said the inference is that the more protected land an area has the greater density of development on the remainder.

He added: “It is like a closed-loop error in computer code that would see the South Downs National Park end up like Central Park, Manhattan, with protected areas hemmed in on every side by high-rise development.”

Mr Griffith gave the example of the derelict Shoreham Cement works as a prime example of a large brownfield site which should be developed, calling for the need to ‘exhaust every single opportunity to prioritise building on brownfield land’.

He also called for greater protections of green corridors for wildlife and praised the work of the Knepp Estate as an example of conservation that should be protected from large housing developments, such as the one proposed in West Grinstead.

Finally, he called for special recognition of the UK’s dark skies and suggested that the next draft of the National Planning Policy Framework be used to preserve and restore the ability of future generations to see the milky way on a dark night.

During the debate Crawley MP Henry Smith raised the threat of 10,000 homes west of Ifield in ‘unsustainable circumstances on the floodplain’.

He said: “It is very important that while we should provide additional housing for future generations in West Sussex, we must have the environment paramount in our considerations.”

Worthing West MP Sir Peter Bottomley wanted the Secretary of State to visit the area and explain where the land is going to come from for development between the South Downs and the coast.

He raised fresh plans to build housing in the Goring Gap and case in Tarring where a freeholder wants to add a floor to its existing building.

He said: “If the Government get it right, they will get more homes — acceptable homes. If they get it wrong, I do not think they will be respected by the people of all parties who want to have a proper planning system that delivers new homes at affordable prices to a range of people who otherwise would find themselves suffering from housing stress.

Meanwhile, Tim Loughton, East Worthing and Shoreham MP, said he shared the ‘complete horror’ at a the mutant algorithm that ‘may be responsible in the future for the level and type of developments across our country’.

He praised Adur District Council’s plans to acquire New Salts Farm for green space and said the algorithm had to respect, appreciate and recognise’ the local environment and the needs of local people.

He raised the fact that more than half of Adur district’s land is in the national park and it also has the airport and harbour within its boundaries.

Mr Loughton pointed out how most of the available brownfield sites had already been developed and highlighted traffic problems on both the A259 and A27 as well as the district’s oversubscribed schools.

He concluded: “I hope the minister will look carefully at this. Many colleagues on this side of the house who represent constituencies that have large protected areas in them and are bounded by the coast, or by national park areas, areas of outstanding natural beauty or whatever, will be looking closely at how any changes in the planning system will impact on us, because we have done our bit.

“We have taken a lot of development, and a lot of people are feeling rather put upon. They are feeling that the local environment has got a bit too cosy, and they will take it, but they will not take a great deal more.”

In response, housing minister Christopher Pincher said: “I believe we all recognise the crucial need for homes for young people in West Sussex and across the country: homes in sustainable and well-designed communities, homes with the infrastructure that is ready to go, and homes that ensure our beautiful countryside and heritage all around the country—in Staffordshire, of course, but in West Sussex in particular—is protected, preserved and enriched in the decades to come. I am confident that together we can achieve it.”