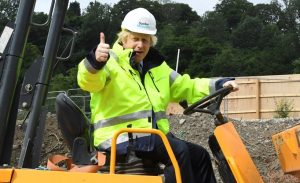 Opinion: South is getting too much of the Government’s housebuilding funds

The obsession with building more homes in the South isn’t the answer to our housing worries, writes John Fitzsimons.

We don’t build enough homes in the UK.

That’s not exactly a controversial statement, with everyone from MPs to property charity Shelter agreeing that there simply isn’t enough housing being produced every year to meet demand.

There are all sorts of things that the authorities have put in place to try to improve the rate at which we build homes, including establishing a host of funding pots aimed at stimulating housebuilding.

Yet all too often that funding is being concentrated in the wrong areas of the country, a new study suggests.

Research from housing giants Knight Frank has looked into where the funding from Government, via Homes England, is ending up.

And it’s striking that huge chunks of that cash are ending up in the South and South East, rather than other areas of the country that not only need funding, but where that money could actually go further.

Knight Frank argues this is the result of the 80/20 rule imposed by the Treasury, which dictates how the central funding is allocated.

Effectively, it forces 80% of the funding to be spent on developments in parts of the country where housing is deemed most unaffordable.

This is defined as areas where average house prices are more than 8.8 times the average household income, which inevitably means more of that money being funnelled into places like London and the home counties.

For example, Homes England runs the Housing Infrastructure Fund which contains around £5.5 billion of cash. So far £4 billion has been handed out, with a massive 83% going to areas in the South of England.

On one level, this sort of strategy makes sense. There’s no escaping the fact that housing is more expensive, and therefore less affordable, in the South.

According to the most recent Cities Index by Hometrack, the average price of a property in London stands at £476,000 while in Oxford it’s worth around £400,000.

Devoting more Government funding to building homes in the South will help put the brakes on those house prices getting even higher, right?

And to an extent that’s true. But equally, yet more investment in these affluent areas will only make them more desirable.

The answer isn’t simply to flood the South with more housing funds; we already have too much focus on London and the surrounding areas for everything from businesses to national sports stadiums.

Besides, we know that developers are only too happy to take on more projects in the South since the profit margins are even healthier.

The money being spent isn’t going very far, and it isn’t having much of an effect.

As Gail Mayhew of the Building Better Building Beautiful Commission puts it, we are condemning “left behind places” to a “vicious cycle” as a result of a lack of investment.

“No funding in these areas maintains a low demand for housing, which in turn ensures values fail the affordability test, thereby perpetuating the problem.”

What does the algorithm say?

The funding farce is coupled with proposed changes to the planning system, which includes introducing a new algorithm which will guide the authorities on where to build 300,000 new homes per year.

The Royal Town Planning Institute has done its homework on the algorithm, looking at what sort of results it’s likely to throw up, and it has suggested that the algorithm would call for 161% more homes to be built in London and the South East, while 28% fewer homes would be built in the North.

So yet again we face a huge focus on building more homes in the most expensive areas, while anywhere north of Watford Gap doesn’t get a look in.

The ‘levelling up’ agenda

Cards on the table, I despise the way the Government talks about ‘levelling up’ the North, but that’s rooted in the way that a gaming term has been appropriated by a bunch of suits who think Final Fantasy is a TV channel they could try to pay for on expenses.

At its heart though, it’s spot on. Our nation is horribly imbalanced in so many ways, and we need a far greater focus on the Midlands, the North East, the North West and so on.

There are plenty of different aspects that need to go into addressing that imbalance, but one of them will be being a bit smarter about how we work out housing targets for specific regions, and how we allocate Government cash to boost those developments.

Just because an algorithm tells you to treble the number of homes built in a specific area, that doesn’t mean it’s a smart tactic.

For example, there might not be enough suitable land to do that.

And these targets can mean that land prices are pushed even higher, meaning the homes produced are more costly, which isn’t going to do much to help affordability anyway.

Yes, of course, we need to build homes where they are most in demand.

But we equally need to do a lot more to ensure that there is higher demand outside of the capital and the surrounding counties.

One of the few upsides to the pandemic has been the way that it has dismantled presenteeism and opened our eyes to the potential of working from home ‒ wherever that may be ‒ more regularly. According to housing industry figures, it’s sparked a jump in demand for housing in more rural, spacious areas.

This is an opportunity. If we don’t take it, then the North/South housing divide will only become more pronounced.