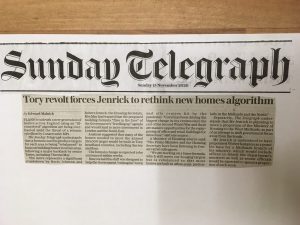 Plans to unleash a new generation of homes across England using an “ill conceived” algorithm are being overhauled amid the threat of a seismic rebellion by Conservative MPs.

The Sunday Telegraph understands that a formula used to produce targets for each area is being “rebalanced” to focus on building homes in urban areas, following a major backlash by senior Tories, including Theresa May.

The move represents a significant climbdown by Boris Johnson and Robert Jenrick, the Housing Secretary.

Mrs May had warned that the proposed building formula “flies in the face” of the Government’s ‘levelling up’ agenda and would lead to more investment in London and the South East.

Analysis suggested that many of the homes needed to meet the annual target of 330,000 would be built in Conservative heartlands such as Surrey and Kent.

Separately, this newspaper understands that Mr Jenrick is planning to move a proportion of the Ministry of Housing to the West Midlands, as part of an attempt to shift government focus away from the South.

The change to the planned formula is expected to be announced within weeks. Sources said the shift was designed to help the Government to “re-imagine” town and city centres hit by the Covid-19 pandemic.

“Covid has been driving the biggest change in city centres since the end of the Second World War and there are massive opportunities for the repurposing of office and retail buildings for mixed use,” said one source.

It comes after Mr Jenrick said there was “scope for compromise” on where the target of 330,000 homes are built each year.

A Ministry of Housing source said: “The Prime Minister and the Housing Secretary have been listening to Conservative colleagues.

“We are working on a fairer formula, which still meets our housing targets but is rebalanced so that more homes are built in urban areas, particularly in the Midlands and the North.

“We are going to revitalise these town and city centres and make them great places to live and work, driving investment and new jobs.”

Mr Jenrick is understood to have pinpointed Wolverhampton as a possible base for a Midlands branch of the Ministry of Housing, which would include offices in which the department’s ministers and senior officials would be expected to spend a proportion of each week.

Those seeking an appointment with the Housing Secretary would then be “just as likely” to see the minister in Wolverhampton as Whitehall.