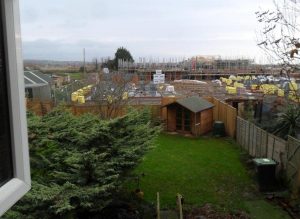 A RESIDENT and her neighbours are “distraught” after trees were cut down just beyond their gardens as part of a major housing development.

Laura Hall said she was shocked when workers began to cut down trees with chainsaws just behind her garden fence in Shadwells Road, Lancing.

Building work is taking place for a development of 600 homes on land in nearby Mash Barn Lane, just east of Shadwells Road.

The mixed-use development by Cala Homes will include a 28 hectare country park, land for a new primary school and an Ikea store.

But Laura said she had not been made aware of any plans to remove trees and shrubbery so close to gardens in Shadwells Road.

She said: “This has been a shock to everyone in this street. It’s just awful.

“Usually the birds are my alarm clock in the morning but I’ve not had a bird in my garden since they started cutting the trees down. The noise level has been crazy.

“With the bushes and trees there before, it submerged what was going on with the development, but now I keep my curtains shut as it’s so horrible and bare out there.

“Some people on the street have no fence and they’re completely exposed. I’m already looking at laurel bushes and bamboo we can order to go up.”

Laura described the field where the trees used to be as “idyllic” and home to wildlife including deer and bats.

She said: “I feel for the wildlife – I just think it’s cruel. It’s really upsetting as I’m a big bird lover.

“The contractors have put up a metal fence barely two feet from my garden now. Pretty much everyone on this street has been affected. My neighbour is distraught.”

Land for the development in Mash Barn Lane was acquired in July after planning was approved in February by Adur District Council. The scheme will include one and two-bedroom apartments and two to five-bedroom homes in the area around the Brighton and Hove Albion training ground.

A spokesman for Cala Homes said letters were sent to residents about the removal of trees.

He said: “Hedgerows and four ash trees along the northern and western boundaries of the site were identified for removal.

“We had hoped to retain the trees, however a recent independent arboricultural survey identified that the trees had Ash Die Back, and therefore had to be removed.

“A letter was sent to local residents earlier this month informing them of the situation.

“We fully understand the importance of undertaking these works with care, and have done so outside of the nesting season.

“We are committed to re-planting well-established, native species along the boundaries to ensure that an attractive and effective landscape screen is reintroduced. We will also be planting a number of trees throughout the new development, to continue to attract local wildlife.”