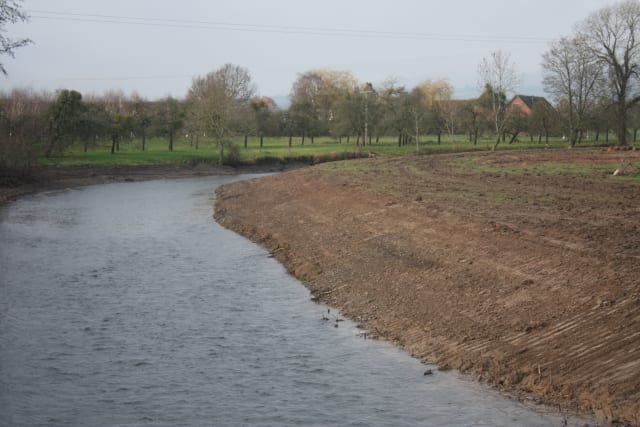 A wildlife trust has said it hopes for a prosecution over the “bulldozing” of a mile-long (1.5km) stretch of a protected river.

Herefordshire Wildlife Trust (HWT) described the damage caused to the River Lugg as a “crime against the environment”, saying it has had “huge repercussions for wildlife downstream”.

The trust said all bankside and riverside habitats have been “completely obliterated” after the river and its banks were “bulldozed, straightened and reprofiled into a sterile canal”.

Wildlife affected by the damage includes crayfish, otters and salmon, lampreys and dragonflies and a host of rare river wildlife, the HWT added.

The trust said the River Lugg would be a “test case” for the Government’s commitment to strengthen wildlife protection.

HWT hopes for a prosecution after it claimed a 16-tonne bulldozer was used by people “well aware” of the fact that the river is designated as a Site of Special Scientific Interest (SSSI) – suggesting they deliberately flouted laws designed to protect wildlife.

Trust chief executive Helen Stace said: “A large stretch of one of the UK’s most important rivers, the Lugg, has been devastated, with dire consequences for wildlife and water quality downstream – this is a tragedy.

“The bankside trees are all grubbed out and burnt, the river gravels have been scraped away, and the beautiful meanders of the river have been straightened and reprofiled.

“As former leader of the English Nature rivers team which notified the Lugg as a Site of Special Scientific Interest, I know this river to be one of the most enchanting tree-lined reaches, with immense value for wildlife.

“This is a crime against the environment. Swift action needs to be taken and we want to see the authorities investigate the matter swiftly.

“We expect this case to be dealt with in a serious and robust manner and any resulting prosecution should act as a deterrent to prevent anyone committing this type of crime ever again.

“We will also be calling for restoration of the river to its natural channel.”

HWT said it believes bulldozing part of the river is a contravention of the Wildlife and Countryside Act and the Environmental Permitting Regulations 2016 and should have required consent from the Environment Agency, as well as planning consent.

Craig Bennett, chief executive of The Wildlife Trusts, said: “The Government has promised to transform our environmental governance as we leave the EU and for the UK to be a world leader in environmental protection.

“Devastating incidents such as this one will be a vital ‘test case’ as we come to the end of the transition period for the Government’s ambition to develop a ‘world-leading’ environment enforcement structure.

“Unfortunately, the Government has so far failed to live up to this standard, with poor resourcing leaving Natural England unable to properly monitor and protect our most important wild places – Sites of Special Scientific Interest (SSSIs).

Andrew Nixon, conservation senior manager of HWT, said: “The actions taken on this stretch of the river will have far-reaching consequences, both for this stretch of river and floodplain and further downstream.

“Removing all bankside vegetation and scraping out the riverbed and banks will cause a huge increase in the speed the water moves through the river and increases the flood risk downstream.

“With no stabilising vegetation, any heavy rainfall and rise in river level and speed will mean massive erosion of the banks, with a great amount of soil washed into the river along with agricultural pollutants such as phosphates and pesticides.

“This soil smothers the riverbed for miles, destroying fish spawn and invertebrates that inhabit it.”

HWT said repairing the damage and restoring natural process and wildlife to this landscape will take decades.

The Environment Agency and Herefordshire County Council have been approached for comment.