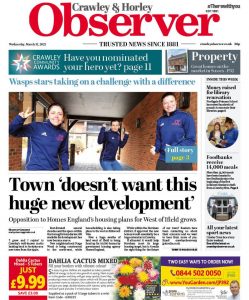 Crawley residents ‘don’t want to see another great add-on’ to their town, according to one of its senior councillors as the government’s housing agency is proposing to build thousands of new homes.

Homes England recently held a consultation on its plans for 3,250 homes west of Ifield, with more than 70 people taking part in a series of online Q&A sessions.

These gave an update on the proposals for the first of three neighbourhoods which would see 10,000 homes built over the next 30 years.

So far, the plans have proved unpopular in Crawley – and if Homes England hoped public opinion would be swayed, they were to be disappointed.

The vast majority of views shared have been negative, with the occasional thumbs-up from an isolated few.

The message has been clear. The majority of people who have taken an interest in this development – including Crawley Borough Council – do not want to see it built.

During the recent Crawley Question Time, Peter Smith, cabinet member for planning, said the main problem was the sheer scale of the proposals.

He added: “Crawley people have got very strong feelings about it.

“We don’t want to see another great add-on to our town, with all the infrastructure that we need, especially when we’re struggling to provide jobs for our own people at the moment.

The site lies on Horsham land and is expected to be designated for development in the district’s new Local Plan.

Consultation on the draft plan is scheduled for June and July before it is submitted to the Secretary of State for examination in October.

It will take around a year to dot the ‘i’s and cross the ‘t’s before the new plan is adopted and published, probably in November 2022.

Once that has happened, the chances of fighting off any development would be vastly reduced – and Homes England aims to have a planning application submitted before the Local Plan is sent for examination.

This is one of the reasons being given for why Crawley Borough Council needs to be fully consulted on the plans.

Mr Smith said: “Ever since we were made aware of this scheme, we’ve made it very clear that we would expect to be properly consulted and involved in it and that we expect that Crawley’s needs should be taken care of and listened to in this development.

“We’ve made clear our feelings on this and that we think that Crawley should have a say on these proposals even before it gets into the Horsham Local Plan.”

It was a view shared by Conservative group leader Duncan Crow.

He said: “It’s right that Crawley Borough has as much say as possible over this because the impact will be felt in Crawley and the infrastructure is going to be needed.

“The concern that I have is that the infrastructure could be delayed from the housing. That’s something that we do see quite commonly over the years.

“Crawley definitely needs a seat at that table. Crawley’s voice needs to be heard.”

The pandemic has done little to change the views of opponents – especially given the damage it has caused to the local economy, Gatwick Airport and employment across the borough. Damage which is likely to take years to mend.

There have been suggestions that the whole thing should be put on the back burner.

Commenting on the plans on Homes England’s West of Ifield website, one person said: “This is now a different era from when these proposals were conceived. Time for a pause and reassessment.”

Another added: “It will take years for Gatwick to recover and for us to see it back to how it was before the pandemic.

“Places are shut and people are on furlough at the airport so the need for 10,000 homes is not, at present, necessary.”

But Homes England engagement manager Tom Hustler said Covid would have a very short-term impact on the housing market and was confident that ‘one of the strongest economies in the UK’ would ‘bounce back fairly rapidly’.

He said: “People say ‘do we need these homes post-Covid?’ The answer is yes – maybe not for the next six months but we won’t have planning [permission] in six months’ time.

“Maybe not for a year but we won’t have any houses built in a year.

“So by the time these houses are coming out of the ground and people are looking at show homes, the market will have come back quite significantly.”

Whether Mr Hustler’s confidence in the economy proves accurate or not, the list of reasons people are opposed to the development plans remains long.

To name a few, they include the loss of some beautiful green space – and the impact that would have on wildlife, concerns about flooding, the lack of infrastructure and the pressure so many new homes would place on Crawley services, the route of the proposed Link Road, and whether or not affordable and social housing pledges will be met.

Ever since the plans for West of Ifield were first made public, Homes England has insisted that 50 per cent of the site will be retained as ‘accessible open space’ with new habitats for wildlife and a 10 per cent increase in biodiversity.

But these promises have not won over some objectors.

One commenter said: “You cannot cut down trees, destroy natural habitats , build thousands of houses and expect us to believe this is in some way an improvement.”

Speaking about the proposed ‘enhancement of Ifield Brook Meadows – providing a strong landscaped edge’, another said: “[The idea] sends shivers up my back as I dread to think what you will do to ruin it.”

On the issue of affordable and social housing, Mr Hustler said he understood why people were ‘cynical’ about it but insisted Homes England would comply with whatever Horsham’s Local Plan demanded.

He said: “As a government body, we always build out to whatever the local policy is. So we will build Horsham’s policy compliant social homes.

“It doesn’t make sense for one public body to get into an argument with another public body.

The link road has been something of a contentious issue.

During the last round of consultations, in January 2020, little was known about the road other than the rough route it would take.

We now know that it will be built in three phases, paid for by Homes England, Horsham District Council and Crawley Borough Council, and will be a single carriageway rather than a dual carriageway.

It is expected to run through the proposed neighbourhood centre rather than around it and join Crawley in the Ifield Green/Bonnetts Lane area, with the Rusper Road junction with the development only open to buses.

But Mr Hustler said it would be more than just ‘a strip of tarmac or concrete with a white line down the middle’.

He said: “It won’t just be a road. It will have segregated cycle ways and segregated footpaths.

The idea of building the road in three phases was described as ‘disastrous’ by one commenter, with another predicting ‘total grid lock until the entire length is completed’.

Of all the concerns raised by the public, flooding has been high on the list.

As the development sits between the River Mole and Ifield Brook, those concerns are not without foundation – but Homes England is confident its water management and flood mitigation plans will address any problems.

The plans centre around a number of Sustainable Urban Drainage systems – known as SUDS – and a network of green spaces and naturalised drainage channels, known as swales.

Mr Hustler said: “Essentially what that means is you hold the water so it doesn’t flood the next parish downstream – but instead of holding it in big concrete tanks, you hold it in green space.

“The land around the River Mole would get boggy if you had very heavy rain and it would flood and hold water if you get exceptional rain, then it slowly drains down.

“It’s all about the right shape of water flow and the right trees and the right plantations. But it means that we can use the existing River Mole as a means of holding the water back so that it’s released slowly after a massive rainfall.”

Reading through the consultation comments left by residents, the opposition to this massive development is clear.

However, the next move is down to Horsham and whether than land will be designated for development in its Local Plan.

Malcolm Bender, a Rusper Road resident, felt the development would be a ‘monstrous act of crude vandalism’, describing Ifield Golf Club as a part of local history and ‘is not a golf course of no consequence that can be thoughtlessly destroyed, ploughing up nearly 100 years of skillful and loving design and maintenance’.

He added: “At the moment the eastern edge of Horsham and western edge of Crawley opens on to open country, farmland and a beautiful golf course. If Homes England have their way, Crawley’s western edge would be a tarmaced relief road.”