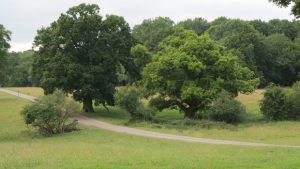 Last month, it emerged that a number of greenfield sites around the rewilding project have been earmarked for development, potentially blocking the ability of wildlife to move between it and the St Leonard’s and Ashdown forests. They are included in Horsham District Council’s draft local plan, which provides a framework for new housing.

Environment minister Zac Goldsmith intervened last week, saying that it would be a “tragedy” for the development to go ahead.

In a statement sent to ENDS, the council insisted that the new plan remains a draft, and will be subject to public examination this autumn.

Its leader Ray Dawe said: “The proposed site in the vicinity of the Knepp estate has come about because the district council is required by the government to give permission for 1,200 homes a year to be built for a period of 17 years in the Horsham District. The land in question is on the other side of the busy A24 carriageway from Knepp and I do not believe that it would particularly impact the existing Knepp site, though I do accept that any new housing would inhibit the development of one of a number of nature corridors that Knepp would like to develop across West Sussex.”

He added that there is a “mistaken belief” that there are brownfield sites available for new homes in the district, “so this obliges us to look at allowing house building on agricultural fields that have been put forward. If we do not do that, developers can appeal to a government appointed inspector and almost certainly they would be given permission to build those homes.”

“Ironically”, Dawe said, the government’s housing agency Homes England already has a plan to build 10,000 homes on land in the north of the district, just west of Crawley. However, “for reasons of timing”, only 3,250 of these can be included in the new local plan, he added.

The council is now in contact with the two local MPs, Jeremy Quin and Andrew Griffith, to find a way around the rules so that this site can be included in the plan in full, avoiding the need for development so close to Knepp. Dawe has suggested that Goldsmith should explain to his colleagues at the Ministry of Housing, Communities and Local Government that very special circumstances apply in this case.