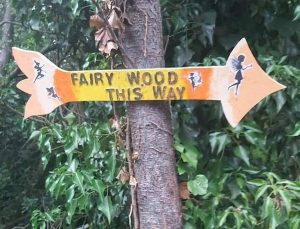 Lawley’s ‘fairy woods’ to be removed after landowners object

A ‘fairy wood’ that has grown over successive lockdowns is to be removed after the land’s owners and stewards objected.

Over the past year it has proved popular with young children and developed an online following of families enjoying the area, but last week a statement was delivered on behalf of the “working partners of the Lawley development” objecting to what the partners said was a lack of dialogue.

According to Lawley & Overdale Parish Council, the group includes “Homes England as the landowners, the Lawley Village Developer Group [Barratt Homes, Taylor Wimpey and Persimmon Homes], [the parish council] as well as Bournville Village Trust as the stewards of Lawley Village”.

A statement on the parish council website on behalf of the partners said that some residents had raised health and safety concerns.

It continued: “As working partners across the Lawley development, we have been made aware of plans to develop an area of woodland known as the Fairy Woods and to extend it to include use of existing rights of way/trails.

“This development had plans to include a defined trail, picnic benches/area and security management with a fundraising campaign launched to achieve this.

Dialogue
“It is great that the community wants to do projects and is something that all parties actively encourage, however there had been no dialogue with the landowners/partners beforehand. We would encourage early dialogue regarding any potential projects prior to any announcements or works being undertaken.

“We need to make it clear that this area is a wildlife corridor with natural habitat to be retained and that no development or installation of structures is permitted and the proposed extension to the trail to incorporate parts of the Ironbridge Way and the Lawley & Overdale History Trail are already existing Public Rights of Way and would need permissions to change any aspects of them and none would be granted on this occasion. Anything that has already been erected will need to be removed.

“Whilst we all appreciate the sentiments, the area is public open space/rights of way, with free access for all residents to enjoy and cannot be sectioned off to identify specific parts.

“We are all trying to work together for the right reasons and we’re not out to spoil anyone’s fun. We all want our open spaces to be clean, green and safe for everyone’s enjoyment, now and in the future.”

Volunteers have been removing the decorations in the past few days, and it is understood they are in contact with the working partners.