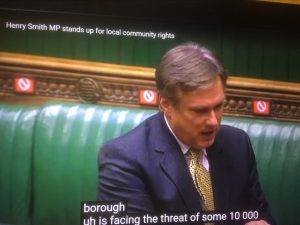 “The ancient parish just outside Crawley is facing the threat of some 10,000 houses in unsustainable circumstances on a floodplain. Would he agree with me that it is very important that, whilst we’re providing additional housing for future generations in West Sussex, we have the environment paramount in our considerations”

I recently met with Homes England to reiterate the opposition of myself and residents across town at their plans for the west of Ifield.

In Parliament and directly to Homes England I am continuing to make clear that the local community does not agree with their proposals to build some 10,000 housing units to the west of Ifield. The question is not whether we need new housing in this country, but where?

The Government is taking important measures to ensure warmer and greener homes nationally. A cash boost of over £560 million will upgrade 50,000 households in social housing and domestic properties with deep insulation, heat pumps and solar panels.

The national upgrade will help these households save up to £450 a year on energy bills and support over 8,000 green jobs annually including plumbers, builders and tradespeople, as part of Government pledging more than £9 billion to increase the energy efficiency of homes, schools and hospitals.

Currently, emissions from domestic properties account for around a quarter of Britain’s carbon emissions, and the green home projects will help cut more than 70,000 tonnes of carbon from the atmosphere each year.

This is an important issue and it is right for it to be addressed by the Government.

I remain deeply concerned however over the environmental pressures and damage of Homes England’s proposals and their effect on the green fields to the west of Ifield; they should take a more joined up approach instead of planning to build on green fields which do not have the infrastructure for a new development.

Last year in the House of Commons I highlighted the issue of these proposals seeing some 10,000 houses in unsustainable circumstances on the floodplain; a point I continue to raise with Homes England.

The need for new homes in this country is there for all to see. What is also apparent is that this must be done in a way which is not only mindful of our environment, but takes into account the views of local residents.

The land to the west of Ifield falls under the Horsham District Council boundary but would have a huge effect on people in Crawley. The issue of infrastructure such as roads, schools and GP provision would also need to be addressed if new housing was to be built.

My record is clear on this issue and it is one I will continue to pursue.

On 12th April I tabled a parliamentary question on new housing developments and proximity to airports, I thought you may be interest in the answer just received:

Question:
To ask the Secretary of State for Housing, Communities and Local Government, if he will publish his Department’s policy on new homes being built near to existing airports; and what assessment he has made of the compatibility of that policy with the Government’s aim to reduce the number of people significantly affected by aircraft noise. (179020)

It is for local authorities to determine the most appropriate location for new housing, and they should do this having regard to the local circumstances that they know best. However, in determining the most appropriate locations, the National Planning Policy Framework makes clear that planning decisions and policies should avoid noise giving rise to significant adverse effects on health and quality of life.

In a situation where new homes are proposed near an airfield, and therefore could be affected by noise from air traffic, the Framework’s ’agent of change’ principle makes clear that the applicant ’or ‘agent of change’ should be required to provide suitable mitigation to address adverse effects of noise. This principle is in place to avoid unreasonable restrictions being placed on existing facilities.