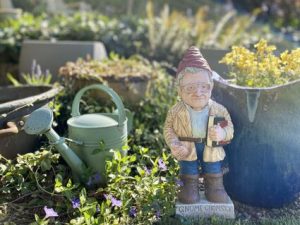 In an interview with C.J. Polychroniou, Noam Chomsky and Robert Pollin share their thoughts on how environmental policy has changed since the first Earth Day was celebrated in 1970, and what we need to do keep this planet habitable in the future. 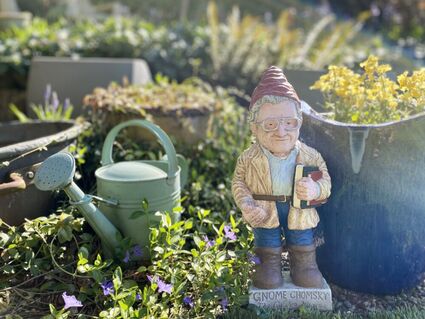 Gnome (Noam) Chomsky had something to say about the environmental crisis.

A friend recently noticed my Gnome Chomsky in the backyard – a fabulous little garden creature in the likeness of Noam Chomsky, standing above the spring flowers.

Chomsky recently referenced the well-known biologist Ernst Mayr when he said that if we do not act quickly in response to the environmental crisis we are proving that in evolution, “human intelligence is indeed a lethal mutation.”

Our many mutations over our development into modern humans, including the opposable thumb, a longer thigh bone, learning to make tools, and, of course, our larger head to house a larger brain, might actually be undone by our own growing intelligence?

The world economy grew since World War II through a dramatic increase in the production and use of finite natural resources. This is, well, somewhat illogical since the resources are not renewable and the landmass is not infinite.

Despite loud claims to the contrary, there is no real scientific debate about the dramatic unintended consequences of this growth on the earth, or of the externalities, to use an economic term.

Humans were supposed to have evolved to be more rational, but we do not seem to be capable of accepting that we are creating an existential threat for the generations who come after us – at least not enough to precipitate a real change in our behavior.

I am not talking about driving a hybrid car or recycling a few plastic bottles, but the big stuff – changing industrial production, implementing growth management, addressing infrastructure transformation, etc., and especially here in the U.S.

So, do we believe we are going to think our way out of the problem?

A friend once told me that he does believe that climate change exists, but does not believe in modifying our practices since he is confident that American ingenuity will somehow come up with a solution, at some point in the future.

Is this a rational thought process?

It is not as if our American economy has been a bastion of innovation and brilliant business leadership for 200 years, as we are led to believe. The U.S. government was the innovator behind (and funder of) the internet, the computer, GPS, and behind the technologies that much later made Bill Gates, Elon Musk, the founders of Google, and others, very rich.

The government has also bailed out industry after industry in the past 30 years when their rational brains seemed to get them into trouble. There is no one to bail us out of the environmental crisis, at least not if our big brains do not save us sooner rather than later.

Kurt Vonnegut wrote a hilarious and sobering novel called “Galapagos” in 1985. Spoiler alert, but the book is basically about the end of human existence as we know it (as set in the place where evolution was “discovered”).

The narrator recognizes that our perception of human sovereignty over not only other beings but the functioning of the earth itself is what finished us.

We think we can change what is around us without changing ourselves, so like Chomsky and Mayr, Vonnegut writes, “The only true villain in my story: the oversized human brain.”