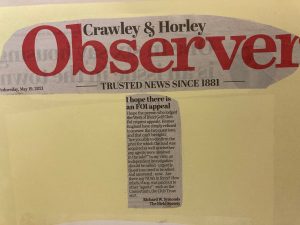 I hope the person who lodged the West of Ifield Golf Club FoI [Freedom of Information] request appeals. Homes England have simply refused to answer the two questions, and that can’t be right:

“Are you able to confirm the price for which the land was acquired as well as whether any agents were involved in the sale?”
In my view, an independent investigation should be called – urgently. Questions need to be asked and answered – now.
Are there any NDA’s in force? How much, if any, was paid out to other “agents” – such as the Consortium, the Club Trust etc?
Yours sincerely
Richard W. Symonds 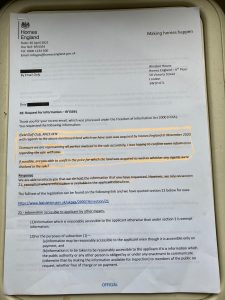 The Freedom of Information [FoI] Request

“Apparently Homes England refused to provide the information requested because it was available elsewhere. This seems a very poor reason not to provide a straight answer to a couple of straight questions. They confirmed that they have the information so, having ascertained that, there would be no further cost involved in providing a straight answer. They are supposed to be a Public Body working for us, the public, so I am bound to wonder whether they are hiding something rather than serving the public interest”