A deal over the running of Crawley Borough Council for the coming council year has been reached between the Labour group and Independent Rory Fiveash after several weeks of negotiations.

Earlier this month, the Conservatives won eight of the 14 seats which were up for election, giving them a total of 18 seats compared to Labour’s 17, with one Independent.

A motion of no confidence in Peter Lamb and his Labour administration was tabled by the Tories for tonight’s meeting (Friday May 28) after no cross-party agreements could yet be reached about the future running of the council.

But with a Labour councillor holding the casting vote at the annual council meeting this newly-announced deal would mean a Labour-Independent coalition would lead the council for the next 12 months.

Mr Fiveash would be deputy leader and cabinet member for resources in the administration.

As part of the coalition deal, the council would mothball rather than close the Millpond and Creasys Drive adventure playgrounds and seek new delivery models for the sites, in addition to providing a 12-month extension to the Government’s eviction ban in relation to council properties.

Mr Lamb said: “Crawley faces enormous challenges over the year ahead, as we seek to rebuild from the pandemic. Cllr Fiveash’s decision to work with us gives the council the stability we need to tackle these challenges head on and I look forward to working closely with Rory again.”

Mr Fiveash said: “I am pleased that we have reached an agreement to work together and, with our shared values and principles, I believe that we can offer a bright and secure future for the people of Crawley as our town recovers from the pandemic.”

Mr Fiveash quit the Labour Party last summer less than a day after his mother and then fellow councillor Karen Sudan quit the party following allegations of anti-Semitism.

At the time, he hit out at long delays with Labour’s complaints system saying he had been under investigation by the party for more than year over three emails he had sent. 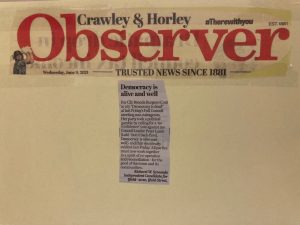 Her party took a political gamble by calling for a ‘no confidence’ vote against the Council Leader Peter Lamb (Lab) – but it back-fired.

Democracy is alive and well – and that was clearly evident last Friday.

All parties must now work together in a spirit of co-operation and reconciliation – for the good of this town and its communities.