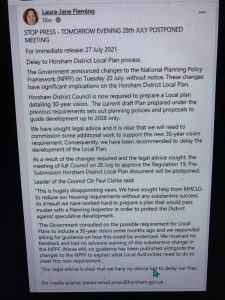 The Government announced changes to the National Planning Policy Framework [NPPF] on Tuesday 20 July, without notice. These changes have significant implications on the Horsham District Local Plan.

Horsham District Council is now required to prepare a Local plan detailing 30-year vision [2050 – Ed]. The current draft Plan prepared under the previous requirements sets out planning policies and proposals to guide development up to 2038 only.

We have sought legal advice and it is clear we will need to commission some additional work to support this new 30-year vision requirement. Consequently, we have been recommended to delay the development of the Local Plan.

As a result of the changes required and the legal advice sought, the meeting of Full Council on 28 July to approve the Regulation 19, Pre-Submission Horsham District Local Plan document will be postponed.

“This is hugely disappointing news. We have sought help from MHCLG [Ministry of Housing, Communities & Local Government – Ed] to reduce our housing requirements without any substantive success. As a result, we have worked hard to prepare a plan that would pass muster with a Planning Inspector in order to protect the District against speculative development.

“The Government consulted on the possible requirements for Local Plans to include a 30-year vision some months ago, and we responded asking for guidance on how this could be evidenced . We received no feedback and had no advance warning of this substantive change in the NPPF. Worse still, no guidance has been published alongside the changes to the NPPF to explain what Local Authorities need to do to meet this new requirement.

“Our legal advice is clear that we have no chance but to delay our Plan”.