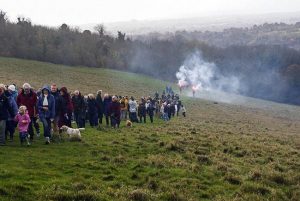 ON JULY 24, more than 300 trespassers ignored circling farmers’ pick-up trucks and a drone buzzing overhead to trespass in a secret Downland valley north of Brighton.

This was the work of the new Sussex network Landscapes of Freedom, working with the national Right to Roam campaign — led by Nick Hayes and Guy Shrubsole.

After we’d reached our target and settled ourselves across the soft, flowery turf of the natural amphitheatre formed at the head of Pangdean Bottom, I asked the assembly a couple of questions.

“How many of you have been here before?” and “how many of you knew of this place’s existence?” No-one raised their hands except our small organising group.

Yet this huge valley — half a mile long and a third of a mile wide — has been public land in Brighton City Council ownership since 1924.

It lies only 1.5 miles north of the busy edge of Brighton and only a mile from the Devil’s Dyke tourist hot-spot, crowning the scarp of the South Downs.

How is it that 19 years after the South Downs was designated a national park and 21 years after the enactment of a partial right to roam over “down” as well as heath, mountain, moor and common, this valley and huge areas of Downland are still forbidden territory for ramblers, adventuring children and all those who seek the healing embrace of nature?

There was plenty of humour. As the farm guys sounded their (feeble) vehicle horns to silence our speeches some wag shouted out “honk if you support the right to roam!”

And as the larger of the two cops present missed his footing and tumbled down the soft hillside — rolling over and over to the bottom — someone shouted out: “The full weight of the law!”

To give him credit, the plod cracked a smile even before he came to a stop.

Yet there were moments of shared anger, too. Ruth from Traveller Pride describe how, “while we are all impacted by the impending policing Bill [Police, Crime, Sentencing and Courts Bill] for Romany Travellers and Irish Travellers specifically it is an act of cultural genocide.

“It will become illegal to stop anywhere with the intent to reside. What that means for traveller families is that they can have their ‘house’ seized; they can face imprisonment; they can face impossible fines — £2,000-plus — and for our community there’s no safety net below that.”

So how is it that this particular site has for so long been in council ownership, yet been forbidden and secret to the people of Brighton?

When I “smuggled” a Brighton Council countryside ranger to the valley in 1997 he was amazed to discover its existence and immediately made a mobile call to his manager to express his astonishment.

The answer lies partly in this particular tenant farmer’s game bird shooting business. If you walk these slopes and thickets from late summer through the winter you will be met with teeming numbers of semi-tame pheasants and partridges.

They fly up from your feet on all sides. Three large game bird release pens are hidden in an Ash wood and two scrub thickets.

And that game bird business has had tragic consequences for the ancient wildlife of this valley, too, for pheasants are woodland birds and the farmer has encouraged the encroachment of scrub all over the valley sides to provide them with cover, fencing out blocks of erstwhile ancient biodiverse pasture from grazing, and still planting new bushes into the present.

Beautiful adders have gone from that valley, eaten by foraging pheasants, which take both juvenile and adult snakes.

Together with long decades of arable cultivation on all the tractor-accessible flatter ground, this has meant that the valley’s archaic flowery chalk grassland has shrunk to its final retreats on the steepest land, fragmented into “islands” and small glades.

The rich texture of yellow rockrose — one of the dominant herbs on what is left of the old sward — still survives, with all its co-dependent community of beetles (eight just on that one herb!) bugs, fungi and moths, but it will not survive for much longer if we cannot reverse this long decline.

Surveys have found special butterflies such as adonis blue, chalkhill blue, and brown argus, with pride of Sussex bellflower and one of the largest populations of autumn lady’s tresses orchids I have ever seen.

In summer the tiny greenish lanterns of female glow worms shine up to attract the flying males on their low seeking flights overhead in the early darkness.

There is another major reason too for our decision to organise this trespass in this valley and on Brighton Council land, for the city council is in the middle of a major public consultation about the future of its 13,000-acre Downland estate.

For much of its 150-year history this estate has been mistreated as a second-rate source of council rental income and a source of urban fringe development sites, rather than as a hugely important environmental asset for the delight of Brighton people and our visitors.

When this consultation started we realised that the public were being asked for their opinions about large areas of land of which they had no knowledge and possessed no access rights.

In the course of making a simple public information film on the Downland estate we were obliged to trespass eight times on farm holdings.

The creation of the new national Right to Roam network has reopened a crucial debate.

If we do not know our countryside we cannot defend it. What the eye does not see the heart will not grieve.

A universal right to roam is an imperative if the destruction of nature is to be stopped and reversed.

Dave Bangs is co-founder of Landscapes of Freedom.