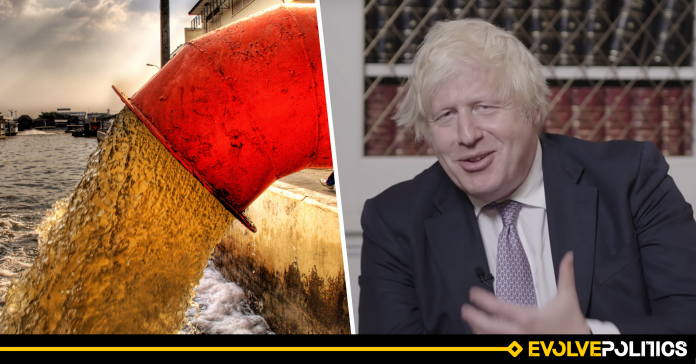 Boris Johnson’s Conservative government have succeeded in voting down an amendment designed to stop private water companies from dumping raw sewage into the UK’s waterways.

The vote came as MPs were debating the final stages of the Environment Bill in Parliament yesterday evening.

Lords Amendment 45 to the Environment Bill would have placed a legal duty on water companies in England and Wales “to make improvements to their sewerage systems and demonstrate progressive reductions in the harm caused by discharges of untreated sewage.“

In 2020, water companies dumped raw sewage into the UK’s rivers and coastal waters more than 400,000 times.

This is despite the UK – and all other countries – being legally obligated to treat sewage before it is released into waterways.

The majority of dumping by private water companies is happening via storm overflow pipes which are only supposed to be used to relieve pressure on the sewage system during extreme weather events such as torrential rain.

Treating raw sewage costs money – and many have speculated that privatised water companies are simply dumping it into our waterways in order to make bigger profits.

Despite the horrendous environmental impact of the disgusting practice, shortly before the vote, the Conservative Environment Secretary George Eustace recommended to his fellow MPs that they should reject it.

And, owing largely to the government’s 80 seat majority, the amendment was indeed defeated – by a margin of 268 MPs to 204.

You can see how your MP voted on the amendment here.

And, just 12 hours after Johnson’s government voted to protect the disgraceful polluting actions of private water companies, they were back at it – with Southern Water exposed dumping huge amounts of raw sewage into the UK’s waterways and coastlines yet again:

Hugo Tagholm, a spokesperson for the Surfers Against Sewage organisation, said the Tories’ opposition to the amendment “beggars belief”, stating:

“Why wouldn’t they want water companies to have a legal obligation not to pollute our rivers and ocean with sewage, for example? It beggars belief and hardly shows a commitment to be the greenest government ever. It’s time for more ambitious thinking and law that builds protected nature back into public ownership rather than leaving it to the ravages of shareholder interests.”

Speaking about the practice last year, the Chief Executive of the Environment Agency, Sir James Bevan, said his organisation was working with water companies to try and reduce the practice, stating:

“Storm overflows are designed to discharge sewage to rivers or the sea at times of heavy rainfall to prevent it backing up into homes and streets. But higher population and climate change means they will discharge more often.

“The Environment Agency is working actively with the water companies to ensure overflows are properly controlled and the harm they do to the environment stopped. Increased monitoring and reporting of storm overflows is part of the solution. It means everyone can see exactly what is happening, and will help drive the improvements and future investment that we all want to see, with £1.1bn of investment already planned for the next four years.”

However, given that the privatised system means water companies exist purely to make profit for their shareholders (rather than in the public interest under a nationalised system), it is extremely unlikely they will be stopping the practice anytime soon – unless new laws are brought in to force them.

Despite promising to make Britain the “cleanest, greenest country on Earth”, Boris Johnson and his Conservative government have once again shown exactly where their priorities lie – not with the people, but with those seeking profit no matter how disgusting their actions.

Recent polls have found that almost two thirds of Brits think water should be brought back under democratic control.

And, given the profit-seeking motives and pollutive actions of water companies, that figure is surely only going to rise going into the future.